The word “entrepreneur”, derived from the French verb entreprende, and the German word “unternehmen”, was coined by the French Economist, Richard Cantillon in the early eighteenth century. These words literally mean “to undertake”. In Cantillon’s view, an entrepreneur is a person who buys at certain prices and sells at uncertain prices. This definition primarily focuses on the element of risk-taking and decisions about resource allocation

Entrepreneurship is a composite skill, the resultant of a mix of many qualities and traits. These include imagination, readiness to take risks, ability to bring together and put to use other factors of production, capital, labor, and land as also intangible factors such as the ability to mobilize scientific and technological advances. Above all, entrepreneurship today is the product of team work and the ability to create, build and work as a team. The entrepreneur is the maestro of the business orchestra, wielding his/her baton to which the band is played.

There are five elements of entrepreneurship:

An entrepreneur is the man or women who are able to actualize his/her innate potentials and develop a character that is not dependent but independent. He/she is that person who undertakes the voyage of creating value by pulling together a unique package of resources to exploit opportunities. He/she has the capacity to build something from practically nothing- initiating, daring, doing, achieving and building and enterprise.

Entrepreneurs have been described as people who have the ability to see and evaluate business opportunities, gather the necessary resources to take advantage of them and initiate appropriate action to ensure success.

Entrepreneurs are achievement oriented, like to take responsibility for decisions and dislike repetitive and routine work. Creative entrepreneurs possess high level of energy and great degree of inauguration, which combined with a willingness to take moderate, calculated risks, enable them to transform what began as a very simple ell-defined idea or hobby in to something concrete.

Practically all undertakings can be referred to as enterprising, i.e.

By understanding the enterprising concept, you can appreciate that all people have the potential to be enterprising. Some people are enterprising when they own a business. Enterprising men and women are able to deal positively with the challenges and problems they face in their daily lives. Being enterprising can bring benefits to you and also help you to become a valued member of your family, community, place of work and society. By adopting an enterprising approach to your activities, you will know what to do in whatever circumstances you find yourself in. This kind of approach will enable you to appreciate the challenges of life because you will be able to translate challenges into positive results.

The term ‘entrepreneur’ is often used interchangeably with ‘entrepreneurship’ but conceptually; they are different just like the two sides of a coin. The differences are as follows:

Competencies refer to underlying characteristics of a person which results in effective or superior performance in a job. The following are major competencies that contribute towards top performance.

All the above competencies are instrumental to make a person successful entrepreneur.

There are various ways by which entrepreneurs have been classified:-

Based on the type of business

Motivation is the force that influences the effort of the entrepreneur to achieve his/her objective. Based on motivation entrepreneur can be classified as:

Rewards for Being an Entrepreneur

Personal costs to be an Entrepreneur

Marco polo, as a go-between was an Italian. He wants to trade routes to the far East.  As a go-between, He had to sign a contract with a money person to sell his goods. In the contract merchant adventurer took a loan at 22.5% rate including insurance.

Entrepreneur used to describe both as an actor and a person who managed large production projects. Individuals did not take any risks because all the resources used to provided by the government of the country, all an entrepreneur should do is to manage it.

A typical entrepreneur in the middle age was the priest. The person in charge of great architectural works used to build castles and fortifications, public buildings, abbeys, and cathedrals.

The connection of the risk with entrepreneurship developed in the 17th century.  An entrepreneur was a person who entered into a contract with the government to perform a service or to supply stipulated products. John law, a Frenchman was one of the entrepreneurs in that period. The founder of the royal bank of France and the Mississippi Company, which had an exclusive franchise to trade between France and the new world. Monopoly on French trade eventually led to collapse of the company.

Richard Cantillion, a of the well-known English economist at the beginning of the 17th century, understood Law’s mistake. He viewed the entrepreneur as a risk taker, observing those merchants, farmers, craftsmen, and others sole proprietors “buy at a certain price and sell at an uncertain price, therefore operating at a risk.”

In the 18th century, the person with capital was differentiated from the one who needed capital. The entrepreneur was distinguished from the capital provider. One reason for this differentiation was the industrialization occuring throughout the world. Eli Whitney was an American inventor best known for inventing the cotton gin. This was one of the key inventions industrial Revolution.

Thomas Edison, the inventor of many inventions. He was developing new technologies and was unable to finance his inventions himself. Edison was a capital user (an entrepreneur), not a provider (a venture capitalist).

In the late 19th and early 20th centuries, entrepreneurs were frequently not distinguished from managers and were viewed mostly from an economic perspective. The entrepreneur organizes and manages an enterprise for personal gain. The materials consumed in the business, for the use of the land, for the services he employs, and for the capital he requires.

Edward Harriman, who reorganized the railroad in the United States. John Morgan, who developed his large banking house by reorganizing and financing the nation’s industries. Traditional technologies innovations (translators, computers, lasers) that is usually associated with the word invention.

The Egyptian who designed and built great pyramids out of stone blocks weighing many tons each, to laser beams, supersonic planes and space stations.

1.3     The Role of an Entrepreneur in the Economy 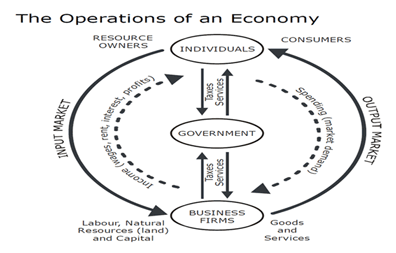 The above flows show:

What Are Innovations Directed To? Create Value.

The notion of value knows a perpetual migration movement towards a better fit between the business expectations and the evolution of the economic environment. Innovation, as any new product or service, leads to the creation of three values.