Budget is a time bound financial program systematically worked out and ready for execution in the ensuing fiscal year. It is a comprehensive plan of action, which brings together in one consolidated statement all financial requirements of the government.  The budget goes into operation only after it is approved by the parliament.  A rational decision regarding allocation of resources to satisfy different social wants requires considerable thinking and planning. Thus budget is an annual statement of receipts and payments of a government.

The functions of budget include the following:

The Concept of Budgeting in Ethiopia

The government budget represents a plan/forecast by government of its expenditures and revenues for a specified period. Commonly government budget is prepared for a year, known as a financial year or fiscal year. In Ethiopia the fiscal year is from July 7 of this year to July 6 of the coming year (Hamle 1-Sene 30 in Ethiopian calendar). Budgeting involves different tasks on the expenditures and revenues sides of government finance. On the side of expenditure, it deals with the determination of the total deals with the determination of the total size of the budget (i.e total amount of money for the year), size of outlays on different functions, and the magnitude of outlays on various activities; on the revenue side, it involves the determination of the size of the overall revenue and foreign aid.

Furthermore, budgeting also address the issue of the budget deficit (i.e. the excess of outlays over domestic revenues), and it’s financing. Budgeting is not solely a matter of finance in the narrow sense. Rather it is an important part of government’s general economic policy. Budget is not solely a description of fiscal policies and financial plans, rather it is a strong instrument in engineering and dynamiting the economy and its main objectives are to devise tangible directives and implement the long term, medium term, and annual administrative and development programs”.

It represents the annual forecast of revenues to be raised by government through taxation and other discretionary measures, the amount of revenues raised this way differ from country to country both in magnitude and structure, mainly due to the level of economic development and the type of the economy.

Ordinary revenues include both tax and not tax revenues. the tax revenues being direct taxes (personal income tax, rental income tax, business income tax, agricultural income tax, tax on dividend and chance wining, land use fee and lease); indirect taxes (excise tax on locally manufactured goods, sales tax on locally manufactured goods, service sales tax, stamps and duty); and taxes on foreign trade (customs duty on imported goods, duty and tax on coffee export). Non tax revenues include charges and fees; investment revenue; miscellaneous revenue (e.g. gins); and pension contribution. The second major item in revenue budget is external assistance. It includes: cash grants, these are grants from multilateral and bilateral donors for different structural adjustment programs; and technical assistance in cash and material form. The third item is capital revenue. This could be from domestic (sales of movable properties and collection of loans), external loan from multilateral and bilateral creditors mostly for capital projects, and grants in the form of counterpart fund.

Categories of Revenues to Government

- Revenue on the basis of Nature

The revenue from tax includes the following.

I. Tax on Income

The Government imposes two types of taxes on income.

They are tax on:

The personal income tax is levied on the net income of individuals, firms and other association of persons. The tax on the net profits of the joint stock companies is known as corporation tax.

It is the tax revenue from properties including rental income tax land use tax etc. 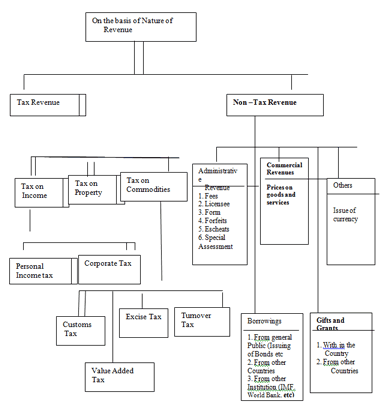 The important taxes levied by the Government on commodities are:

The following categories of revenue are included under non-tax revenue.

It includes the following:

Budget deficit is the excess of total expenditure over total revenue of the government.

Thus deficit financing can be defined as “the financing of a deliberately created gap between public revenue and public expenditure”. The government of Ethiopia has used deficit financing for acquiring funds to finance economic development. When the government cannot raise enough financial resources through taxation, it finances its developmental expenditure through borrowing from the market or from other sources.

There are four important techniques through which the Government may finance its budgetary deficits. They are as follows:

A. borrowing from central bank

B. The running down of accumulated cash balances

D. Borrowing from market or from external sources.

1. Deficit financing has generally been used as a method of meeting the financial needs of the government in times of war, when it is considered difficult to mobilize adequate resources.

2. Keynes advocated deficit financing as an instrument of economic policy to overcome conditions of depression and to raise the level of output and employment.

3. The use of deficit financing has also been considered essential for financing economic development especially in under developed countries.

4. Deficit financing is also advocated for the mobilization of surplus idle and unutilized resources in the economy.

Ethiopia has chosen the federal structure in which a clear distinction is made between the union and state functions and sources of revenue, but residual powers, belong to the center, although the states have been assigned certain taxes, which are levied and collected by them, they also share in the revenue of certain federal taxes.  In addition, the states receive grants-in-aid of their revenue from the federal government, which further increase the amount of transfers between the two levels of government.  The transfer of resources from the central government to the states is an essential feature of the present financial system.

Distribution of Revenues between Central and States

The present federal fiscal system in Ethiopia is of a recent origin. The distribution of revenues between the centre and states is followed on the basis of "constitution of Ethiopia” and proclamation no.33/1992-proclamation “to define sharing of revenue between the central government and the national/regional self governments”.   The articles 96, 97, 98, 99 and 100 of the constitution of Ethiopia make a clear demarcation of areas where the central alone or state alone have authority to impose taxes. It contains a detailed list of the functions and financial resources of the center and states.

The sharing of revenue between the central government and the National/ Regional governments shall take in to consideration the following Principles:

1. Ownership of source of revenue;

2. The national or regional character of the sources of revenue;

3. Convenience of levying and collection of the tax or duty;

4. Population, distribution of wealth and standard of development of each region;

5. Other factors that are basis for integrated and balanced economy.

According to "Constitution of Ethiopia” and Proclamation No.33/1992-Proclamation, revenues shall be categorized as Central, Regional and Joint. That is there are three lists given in the Articles.  They are as follows:

The important sources of revenue under "Constitution of Ethiopia” and The Proclamation No.33/1992-Proclamation “To Define sharing of Revenue between the Central Government and the National/Regional Self Governments” are explained below:

The sources of revenue are given under Federal/Central List are as follows:

I). Duties, tax and other charges levied on the importation and exportation of goods;

II). Personal income tax collected from the employees of the central Government and the

VI). Taxes collected from rent of houses and properties owned by the central Government;

VII) Charges and fees on licenses and services issued or rented by the central Government;

The following shall be Revenues for the Regions:

I). Personal income tax collected from the employees of the Regional Government and Employees other than those covered under the sources of central government.

III) Agricultural income tax collected from farmers not incorporated in an organization.

VI) Taxes collected from rent of houses and properties owned by the Regional Governments;

IX). Charges and fees on licenses and services issued or rented by the Regional Government;

The following shall be Joint revenues of the Central Government and Regional Governments.