We have learned in Chapter I that managers quantify their plans in the form of budget and formal budgeting procedures result in comprehensive operational and financial budgets for future periods. These budgets guide managers and employees as they make their daily decisions and as they try to anticipate future problems and opportunities. In this chapter we focuses on how managers use flexible budgets as aids for planning and controlling. Recall that a key element of control system is feedback –the comparison of actual performance with planned performance. This chapter also provides an overview of how budgeting helps performance evaluation.

All master budgets discussed in the previous chapter are static or inflexible because they assume fixed level of activity. By definition a static budget is not adjusted or altered after it is drawn up, regardless of changes in volume, cost drivers, or other conditions during the budget period. In other words a static budget prepared for only one activity level (for example one volume of sales activity). Because static budgets depend on a particular level of activity, they are not sufficiently informative when it comes to preparing performance report.

To illustrate suppose Evergreen Company prepares a budget based on detailed expectation for the forthcoming month. Evergreen Company’s planned to produce and sale 9,000 units.  However, actual production and sales volume units turned out to be only 7, 000 units instead of the original 9,000 units. A performance report comparing the actual production costs and sales amount with the planned is given in Exhibit 2-1. 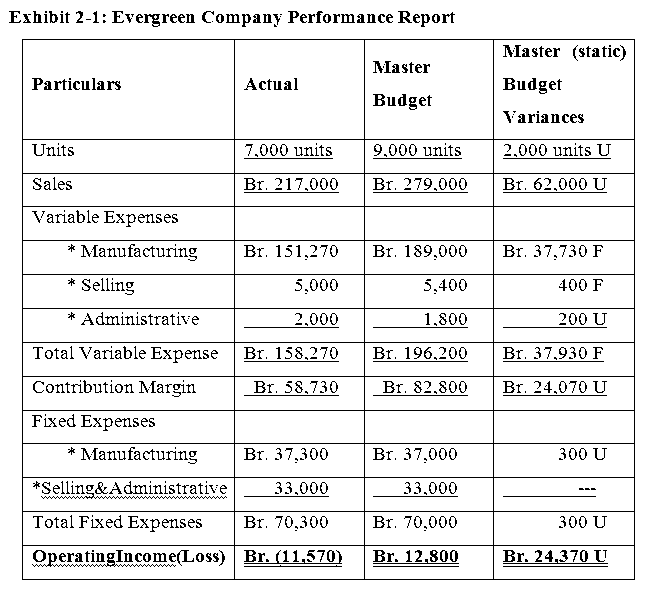 Now according to the report, unfavorable variance occurred for the operating income. However, there is something fundamentally wrong with the report. Actual unit level of 7000 units results are compared with a planned result for 9000units. Under normal circumstances we would expect lesser income at lower activity level.

Flexible budgets, which are budgets designed to direct management to areas of actual financial performance that desire attention. Managers can apply this same basic process to control important areas of performance such as quality or customer service.

Actual activity may differ significantly from budgeted activity because of an unexpected labor strike, cancellation of an order, an unexpected large new production contract, and other factors. In contrast to the performance report based only on comparing the master budget to the actual results, a more useful benchmark for analysis is the flexible budget. A flexible budget (sometimes called a variable budget) is budget that can easily be adjusted for differences in the level of activity. It provides managers more useful information for planning and better basis for comparing performance than, a static or fixed budget.

In performance evaluation, a master budget is kept fixed or static to serve as a benchmark for evaluating performance. It shows revenues and costs at only the originally planned levels of activity.  However, a flexible budget will be prepared at the actual activity level. The flexible budget is identical to the master budget in format, but managers may prepare it for any level of activity.

Flexible budgets have several desirable characteristics. They include:

Flexible Budget Cover a Range of Activity. Accurate predictions of activity levels are sometimes hard to make, and many managers find they make more effective decisions with the aid of flexible budgets. In other words flexible budgets can help managers deal with uncertainty by allowing them to see the expected outcomes for range of activity. It can be used to generate financial results for a number of plausible scenarios.

Flexible Budget Are Dynamic. Flexible budgets allow managers to adjust plans easily when activity level differs from the expected level.  Such budgets address “what is” rather than “what was” or “what was expected”. This dynamic nature of flexible budget makes them a very useful decision making tool for management.

Flexible Budget Facilitate Performance Measurement. Measuring efficiency is an important role of performance report.  Fixed budgets are useful for measuring effectiveness, i.e., achievement of goal. In some cases, however, fixed budgets do not identify the question, “what should the result be, given the actual level of activity”.  In other words, the flexible-budget approach says, “Give me any activity level you choose, and I’ll provide a budget tailored to that particular level.” Whenever actual and budgeted activity is significantly different, a flexible budget variance report provides a better measure of efficiency than a report based on a fixed budget.

To summarize, flexible budget can be useful either before or after the period in question. It can help managers choose a level of operations (expected level of activity) and prepare the budget. It can also be helpful at the end of the period when managers are trying to analyze actual results.

The following steps are needed to develop a flexible budget. 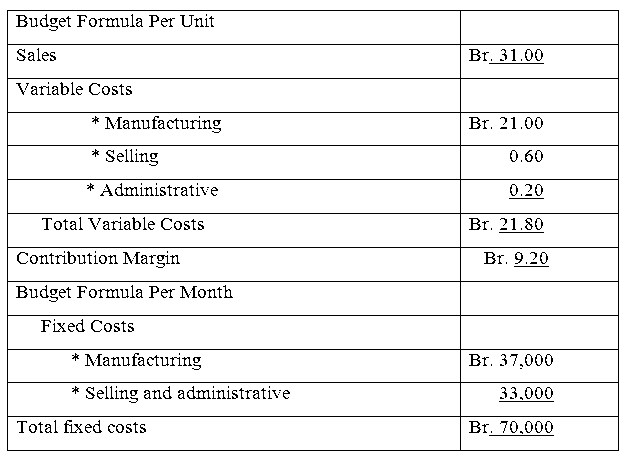 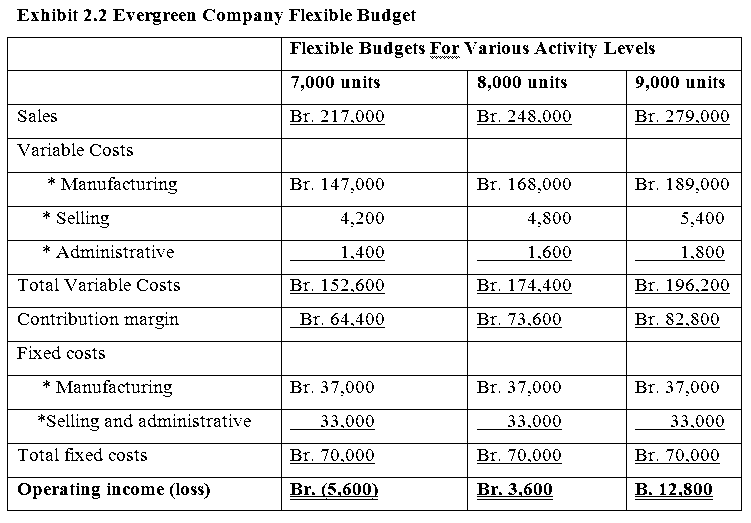 Comparing the flexible budget to actual results accomplishes an important performance evaluation purpose. There are basically two reasons why actual results might not have confirmed to the master budget:

Flexible Budget Variances: - the difference or variances between the flexible budget and actual results for actual activity level achieved. This variance cannot be due to activity levels and must be due to departure of actual costs or revenues from flexible-budget formula amounts.

Activity level variances: - (also known as Sales Volume Variance) is the difference or variances between the master budget amount and the flexible budget amounts. This difference is due to activity (sales) levels. Unit selling prices, unit variable costs and fifed costs are held constant between the master budget and the flexible budget for actual activity level.

To illustrate, refer the data given in for Evergreen Company. Exhibit 2.3 shows a condensed result of the static (master) budget variance, the sales activity variance, and the flexible-budget variance. 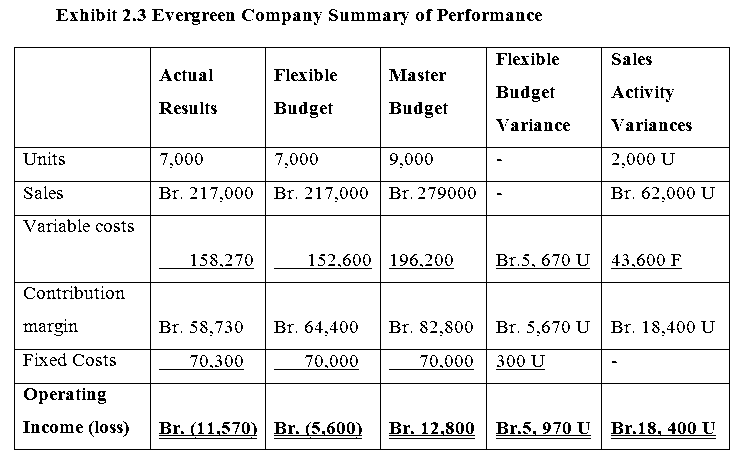 *U or F indicates whether the variances are unfavorable or favorable, respectively.

Thus, the total master budget variance for Evergreen Co. amounts to Br. 24,370 unfavorable (Br. 5970 U + Br. 18400 U). The sum of the activity-level variances here equals sales-activity variances because sales are the only activity used as a cost driver.

Managers use comparisons between actual results, master budgets, and flexible budgets to evaluate organizational performance. When evaluating performance, it is useful to distinguish between effectiveness-the degrees to which a goal, objective, or target is met- and efficiency-the degree to which inputs are used in relation to a given level of outputs.

Performance may be effective, efficient, both, or neither. For example, Evergreen Co. set a master budget objective of manufacturing and selling 9,000 units. Only 7,000 units were actually made and sold, however. Performance, as measured by sales-activity variances, was ineffective because the sales objective was not met.

Was Evergreen’s performance efficient? Managers judge the degree of efficiency by comparing actual outputs achieved (7,000 units) with actual inputs (such as the quantity of direct materials and direct labor). The less input used to produce a given output, the more efficient the operation. Evergreen was inefficient in its use of a number of inputs.  In the next Chapter, direct material, direct labor and variable and fixed overhead flexible-budget variances will be discussed in detail.

Note that, in addition to the above, all variances are affected by the care used in formulating credible budgeting or standard amounts.

In the next chapter will show how analysis uses standards to subdivide these variances (flexible budget variance) into price and efficiency components.

The budget that provides a firm with a capability to compute expected revenues and costs for range of activity is called a flexible budget. Flexible budgeting has three major uses:

Flexible budgeting is the key to providing the frequent feedback that managers need to exercise control and effectively carry out the plans of an organization.

Concepts and Principles in Accounting

Concepts and Principles in Accounting