When we resort to fiscal policy to combat unemployment or inflation, we are deliberately tampering with the federal budget. That is what discretionary fiscal policy really is budget policy.

The federal budget is a statement of the federal government's planned expenditures and anticipated receipts for the coming year. Whenever unemployment exists (whenever the unemployment rate is above the natural rate), the federal government should plan a deficit budget. That is it should plan to spend more than it expects to collect in taxes. By taking this action, the government infect the economy with additional spending or aggregate demand, that should help drive it toward full employment. Inflationary times call for the opposite approach, a surplus budget, which expresses the government's intention to spend less that it expects to collect in taxes. A surplus budget help reduce the amount of aggregate demand in the economy and thereby moderates inflationary pressures. A balanced budget – a plan to match government expenditures and tax revenues – is appropriate only when the economy is operating at full employment, when it has achieved a satisfactory and needs neither stimulus nor restrains.

The government budget is a financial plan of activities to be performed sometime in the future. However, in the process of delivering these public goods and social services, the government may face budgetary deficits when expenditures exceed government revenue, it looks for ways and means to finance these deficits.

Regardless of the type of economic system that a country follows there is always a government. However, it may take different forms depending on the political, social and economic factors. Some economies may have highly centralized government systems while others may have a decentralized body of governments. Some of the forms of the government include federal government, regional government and local government.

This involvement become strong and necessary, particularly in the case of the existing situations of developing countries where the majority of the population is poor and where the private sector plays relatively minimal role.

Fiscal policy involves managing the economy through the generation of revenues to discharge the responsibility of the government by financing expenditures. The role and functions of fiscal policy in the economy can be outlined in the following ways:

Source of government revenue are divided into tax and non-tax revenue. The principal source of government revenue is tax revenue. Tax revenue can be further decomposed into direct, indirect and foreign trade taxes. Direct taxes are taxes levied directly on persons or legal person entitles in the form of personal income taxes, property taxes, corporate income and profit taxes and others. Indirect taxes are taxes levied on goods and services. Consumer pay these taxes indirectly when they buy goods and services. The third category of taxes constitutes the foreign trade taxes that are levied on imports and exports.

The non-tax revenue can be composed of collection of charges such as capital charges and residual profits, fees, fines, sale of government properties and others.

6.4 The Structure of Government Budget

The structure of government budget constitutes the formats in which the budget data are organized and classified for different purposes. Not only the intentions of the government will be revealed but also the responsibility of implementing agencies will be clearly indicated in these formats. The classification of government budget is divided into revenue and expenditure budget.

Revenue budget consists of the annual forecast of government budget from tax and non-tax sources. In Ethiopia, the annual revenue budget is structured into ordinary revenue, external assistance and capital revenue.

The direct tax of the ordinary revenue consist of personal income tax, rental income tax, business income tax, agricultural income tax, tax on dividend and chance winning, land use fee and lease. The indirect tax is consisting of the excise and sales tax on locally manufactured goods, service sales tax, stamps on duty. Tax on foreign trade includes customs duty and excise tax on imported goods, sales tax on imported goods and export tax on coffee. The revenue budget for the federal government of Ethiopia is prepared by the ministry of finance (MOF) and for these regional governments by the respective regional finances bureaus. 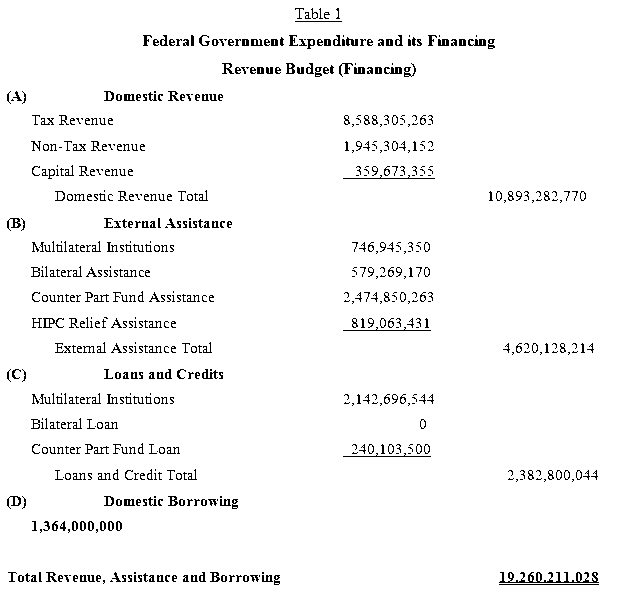 The recurrent budget is mostly financed from the domestic revenue source, that is from tax and non-tax revenues. The capital budget is usually financed by external borrowing and grants. 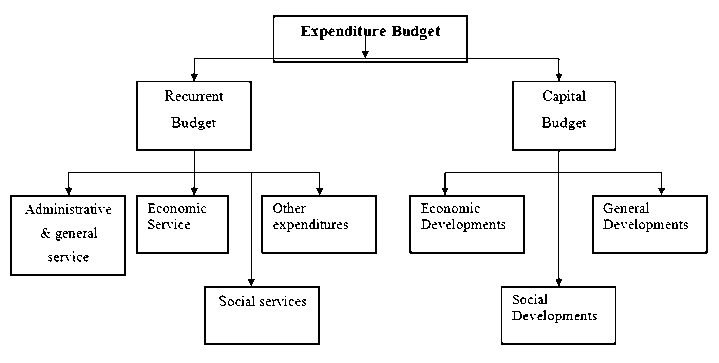 The recurrent budget expenditure consists of expenses that are repeated in nature like salaries of civil servants. The recurrent budget is structured in Ethiopia under four functional categories: Administrative and general services, economic services, social services, and other expenditures. All government bodies fall under either of these categories. For instances, administrative and general services include such activities as political organs of the state such as council of representatives and ministers, ministries, defense and so on. The economic services include such activities under the agricultural, industrial and service sectors. The social services include such activities as health, education and culture. Other expenditure include pension payments, repayment of public debts, provision of unforeseen expenses and similar items. Capital budget expenditure is usually made on the acquisition and improvements to fixed assets and includes the expenses for consultancy services. The capital budget is grouped under three headings: economic development, social development, and general development. Economic development includes production activities in the agricultural and industrial sectors, economic infrastructure in mining, road, and energy, commerce and communication. Social development includes such activities like education, health, urban development, and welfare. 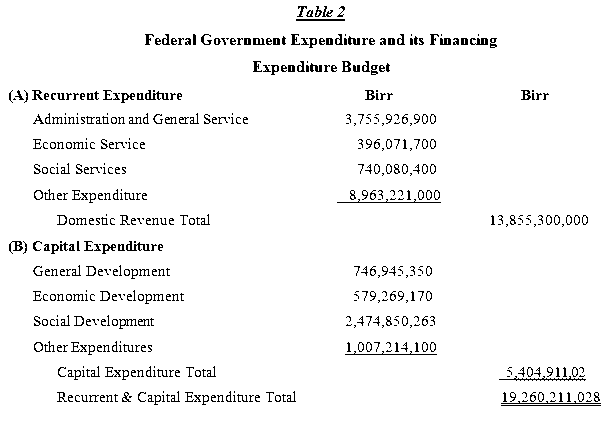 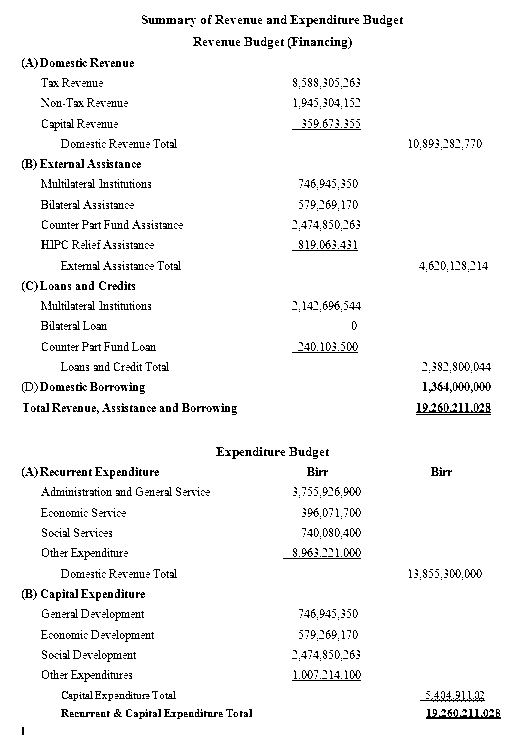 i) Comprehensive management of public expenditure

Proclamation No. 57/1996 "Financial Administration proclamation of the Federal Government of Ethiopia" stipulates that the budget will comprehensively manage public revenues and expenditure. The proclamation requires that all public money except those allowed by law by placed in the consolidated fund and that all disbursement from the consolidated fund be approved by the council of peoples representatives through an appropriation. Appropriations will be implemented through the annual budget and through supplementary budgets as necessary. No expenditure or commitment of expenditure can be incurred from an appropriation without the approval of the ministry of finance.

The ministry of finance will establish the revenue projection for the annual budget. Expenditure ceiling will be established based on this forecast taking into account policy largest and external agreements establishing financing limits.

iv) A balance of capital and recurrent expenditure

v) Transparent Presentation of items and activities of expenditure

It is government policy to strengthen the line item budget and their introduce cost center budgeting to promote responsibility for inputs and their outputs. Five steps are being taken to implement these reforms. Once step is to develop a consistent coding of the chart of accounts. The charts of accounts are the major budget headings used to present the budget.

A second step is to promote consistency in budget categories. Consistent formats should be used to the extent possible by both the capital and recurrent budgets.

A third step is to link where possible capital and recurrent expenditures on a cost center basis. Cost centers will allow managers in public bodies to know the total cost of an activity or an administrative unit and can guide budgeting decisions.

A fifth step in improving the budget will be the introduction of work plans for the cost center. The work plans will link inputs to outputs and will form the bases of a public body's request for a budget.

Budgets will be prepared according to an authoritative calendar. The calendar will schedule the seven phases of budgeting:

Except for emergencies that require reallocation or delay of appropriated disbursements, or shortfalls in revenue collection, budgets will be fully funded from the consolidated fund and promptly disbursed.

The government budget is a financial plan of activities to be performed sometimes in the future. However in the process of delivering these public goods and social services, the government may face budgetary deficits when expenditures exceed government revenue, it looks for ways and means to finance these deficits.

Fiscal policy involves managing the economy through the generation of revenues to discharge the responsibility of the government by financing expenditures.